When I travel, I overplan. It’s genetic. It comes from a genuine place- I want to see every sight and make the most of my time in any location. But when I went to Sevilla to visit my sister, I knew this time would be a little different. She warned me of the slow service and the molasses-like pace of the city. Where else do they have the siesta- where people literally leave work in the middle of the day to go home and take a nap?! It blew me away. Yet, it forced me to reevaluate and take it all in, which ended up being a gift.

Looking for a stress-relieving trip? Sevilla may just be the remedy to your hectic mind. So sit back and picture a sunny day as I provide some tips and tricks on how to live like a true native when in Sevilla.

Meander through the Alcazar Gardens

These gorgeous gardens lay at the back of the Alcazar. They seem to stretch on forever. Follow the maze or sit on the benches and soak up the sun. Take a whiff of that orange tree smell. Keep an eye out for the peacock roaming about.

Take a boat cruise down the Guadalquivir River

Let the wind blow through your hair as you lay back on a boat cruise down the river. Admire the riverside restaurants and maybe pick one out for later. Listen to (or ignore) the voice over the intercom point out buildings as you pass. This is the perfect activity for a sunny afternoon with friends.

Take an evening paseo through the Plaza de Espana

The Plaza de Espana is a great place to be at sunset. The last golden rays play off of the yellow and blue tiles in a way that makes the plaza glow. Read about each region of Spain on the specially decorated benches that line the bend. Maybe jump in a boat and lazily row under the grand bridges. Watch as the day turns to night and the lights around the plaza turn on.

Metropol Parasol, locally know as Las Setas, or the mushrooms, has a market in the mornings and restaurants for the evening. Enjoy a sangria as you watch the shoppers and pedestrians flow by. You can even go up onto las setas for a view of the city from above.

Wander through roman ruins at Italica

Just outside of Seville (easily accessible by bus), you will find the Roman ruins of Italica. Founded about 200 B.C., this was the hometown of two of Rome’s most famous emperors: Trajan and Hadrian. It also holds the best-preserved amphitheater- also one of the empire’s largest. Unfortunately, there is little historical information available to describe the ruins as you walk through, and absolutely none in English. Also, if you go in the heat of summer, remember to bring water as there is very little cover. But if you enjoy walking through ruins and imagining what the longest lasting empire looked like 2,200 years ago, Italica is the attraction for you.

Tapas offer the perfect way to make a meal last for hours. A group of friends laughing around a table can order one small dish at a time. Foods favored in Sevilla are paella, jamon serrano, salmorejo, and of course, anything with jamon (ham). Also enjoy some sangria or wine. They have beer but a restaurant usually only keeps one on tap, a light lager.

No need to wait until you’re hungry to stop at a cafe. Cafe con leche (or coffee with milk) is served everywhere, all day, every day. Enjoy one at breakfast, recharge in the afternoon, or take one after dinner.

If you can manage the effort, climb the bell tower, or La Giralda, for a spectacular view of the city. Reward yourself after all of those stairs with some gellato or a nutella crepe and more people watching.

Of course, you could fill your day running from church to museum and back to another church. You can always find a way to be busy no matter where you are in the world but in order to truly experience Sevilla, you’ve got to sit back and relax.

Amsterdam is by far my favorite city in the world. People always ask me why and I can’t help but think, where do I start? It won’t be everyone’s favorite but I know Amsterdam fits me like a glove. So here’s the need to know information on this canal town in my first City Spotlight. 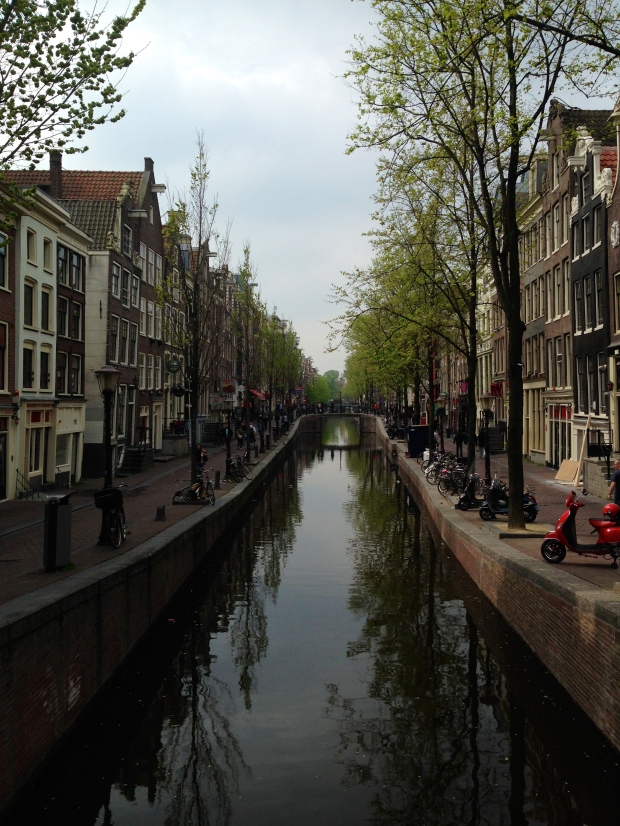 Location: The heart of the Netherlands, Amsterdam sits off the North Sea in Western Europe. Centrally located, it has been a hub of commerce for hundreds of years.

Recommended length of stay: If you are pressed for time, I would say minimum 2-3 nights. However, this is a great city to get an apartment for a couple weeks and really soak in the laid back culture.

Travel Speed/Style: Slower is better. It is a very young city, but it draws in people of all ages. Solo travelers, families, and couples will all find it perfect for their style. Also, it is one of the most LGBTQ-friendly cities in the world, especially during the annual Gay Pride Festival.

Language: Dutch, English- if you are concerned about language barriers, this is a great starter city to get your feet wet, nearly everyone speaks English.

Culture: I would say mellow but it is also known for its young party scene. Famous for its relaxed stance on weed and prostitution, it is one of the most notoriously liberal cultures.

Seasons: Peak Season is June-September, Shoulder Season is March-May, and Off-Season is October-March. If you go in peak season expect long lines for Amsterdam’s many popular museums. 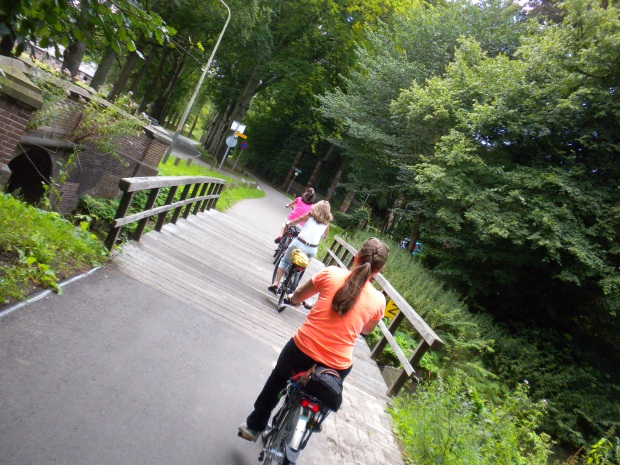 Modes of Transportation: walking, bicycles for rent, and tram are best for the central area. This is a terrible city for a car.

Things you can skip: Don’t drop any serious cash on a tour when there are tons of free walking tours! Sandeman’s Europe Tours is by far the best.

Tips and Tricks: Amsterdam is best experienced out and about. Walking tours, biking, boating the canal, and meandering are all perfect ways to experience the city.

Myths Dispelled: Weed is not legal! The police look the other way as long as the “cafes” are being discreet. So don’t light up right in front of a police station! Also, prostitution isn’t technically legal either.

I absolutely love Amsterdam.  I hope to live there someday. What are your thoughts on Amsterdam? Overrated or is the hype warranted?

Though I went in cloudy February, Andalucia is a beautiful region to visit. I spent time in Sevilla, Granada, and Cordoba. If you like beautiful architecture, a country-wide nap-time, and sangria served all day, Andalucia is the place for you.

Take a stroll through the massive Alhambra complex in Granada. There are gardens, palaces, and amazing views to enjoy.

Take a paseo through the Plaza de Espana in Sevilla. Some scenes from Game of Thrones were filmed here. The plaza is also beautiful lit up at night.

I finally got a bit of blue sky as I took a walk through Old Town Granada. Pro-tip: any time is a good time for a cafe con leche in Southern Spain. 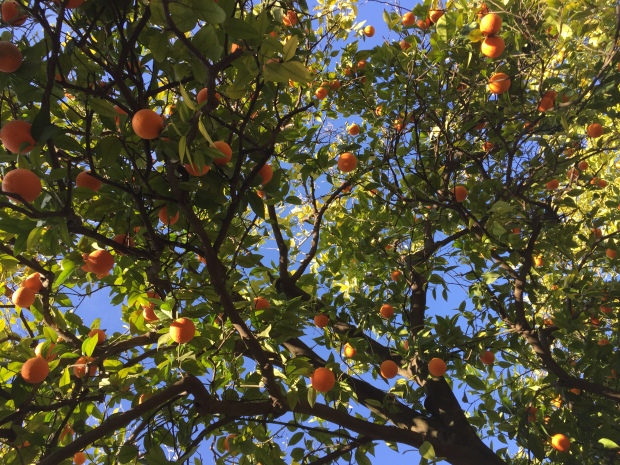 Orange trees are a dominant characteristic of Andalucia. Not to eat, though. Seriously, don’t try to eat them, they’re very bitter. If you happen to visit while the oranges are being harvested or falling off, like I did, the city pleasantly smells of citrus.

Half of Andalucia’s grandeur stems from its Islamic influence. The Moors lived in the area for hundreds of years and Islamic scholars brought math, science, architecture, and different cultures to the region.

The Romans always seem to leave a lasting mark. Above is an old Roman wall that runs through Cordoba.

An overlook of Granada from the Alhambra. You can see the Cathedral standing tall above the rest.

Any city you visit in Spain is bound to have a grande Cathedral looming above you. The Cathedral in Sevilla is the third-largest church in Europe and the largest Gothic church anywhere. Christopher Columbus is also entombed here. 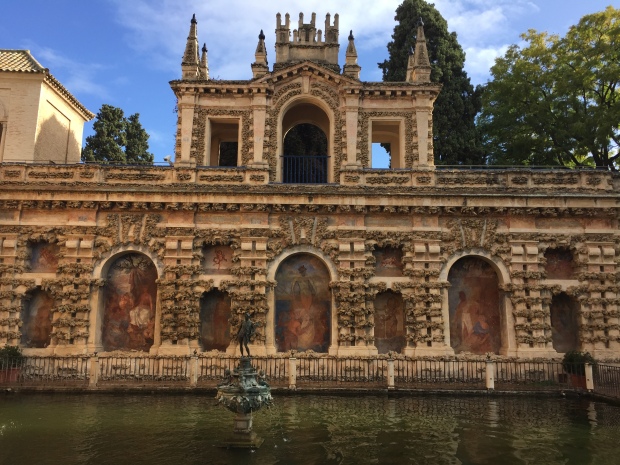 This gorgeous facade can be found in the gardens of the Alcazar in Sevilla. These gardens were also used as a filming location in Game of Thrones.

Andalucia has a lot to offer: good food, beautiful architecture, and easy living. Bonus: it’s also pretty cheap. I’d recommend Andalucia to anyone… but maybe plan your trip for a sunnier time of year.

Follow A Great Place To Get Lost on WordPress.com
Join 9 other followers